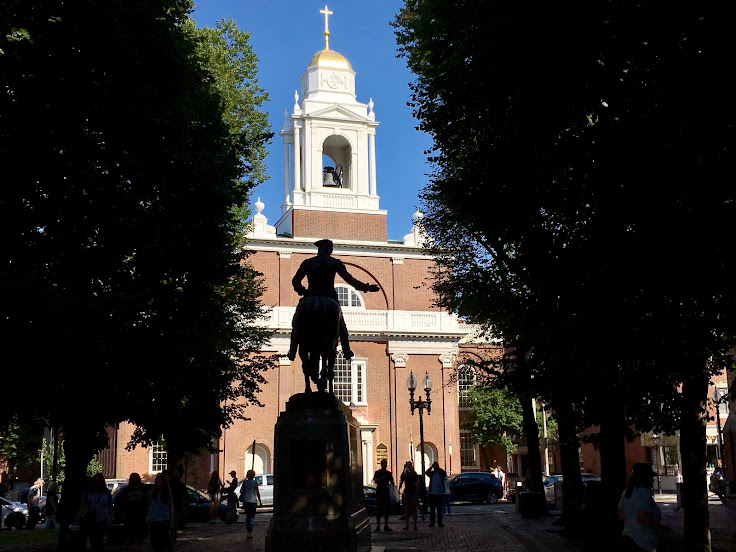 2 hours and 30 minutes
Guided by Adam

When friends come to Boston and ask for suggestions on what to see, this is the walk that I give them. There is no better way to experience the history, nature, food and fashion of the city. Come on a walk of five neighborhoods, from chic Newbury St, to the mansions of Commonwealth Ave, to the charm of the Boston Common, to the Colonial trappings of Fanieul Hall, to the culinary delights of the Italian district. We'll end where the Revolutionary War began. If you only have a few hours in Boston, this is the way to see the best of the best.

Beyond the Witches: Spooks, Murder & Sinister Hauntings of Salem 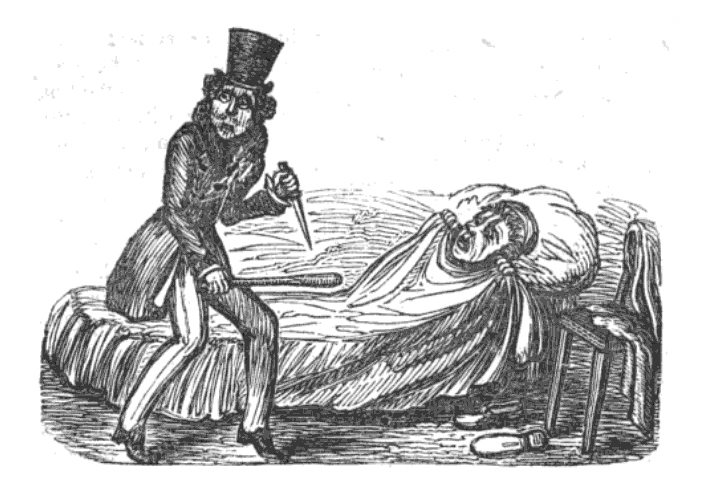 Beyond the Witches: Spooks, Murder & Sinister Hauntings of Salem

1 hour and 15 minutes
Guided by Jillian

Most people associate Salem's gruesome past with the witch trials of 1692. What they do not realize is just how many other incidents of scandal, paranormal activity and murder have flooded these streets over the centuries. Come on a walk of historic Salem to investigate the wicked dealings, mischievous spirits and sinister beings lurking in the shadows. You will soon discover a village brimming with stories of kidnapped sailors, greed-fueled murder and desecrated human remains. There is a macabre history beyond Salem's witches.

The Perfect Day For Kids Of All Ages: Harvard Square Edition 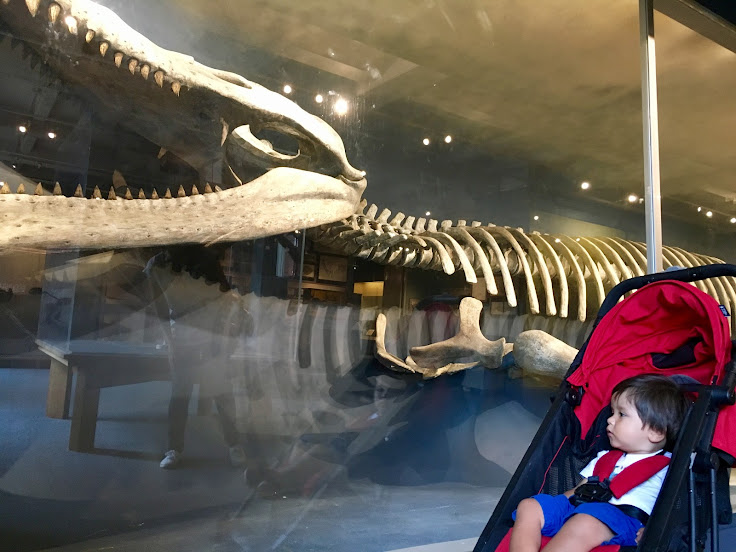 The Perfect Day For Kids Of All Ages: Harvard Square Edition

2 hours and 30 minutes
Guided by Steve

Raising a pre-schooler in Cambridge, I explore the neighborhood on a near-daily basis with my son Elliot, and have a good sense of what makes for a hit or miss. From our walks, excursions and field trips, I've pieced together the itinerary for the perfect day in Harvard Square. We'll visit the hands-on Harvard Museum of Natural History, lunch at a food truck, run around a playground, visit the funnest kids bookstore in Cambridge and end with cookies. My family loves each of these places, and I'm certain your's will too.

The Insta-Worthy Stroll of Back Bay & Beacon Hill, Boston 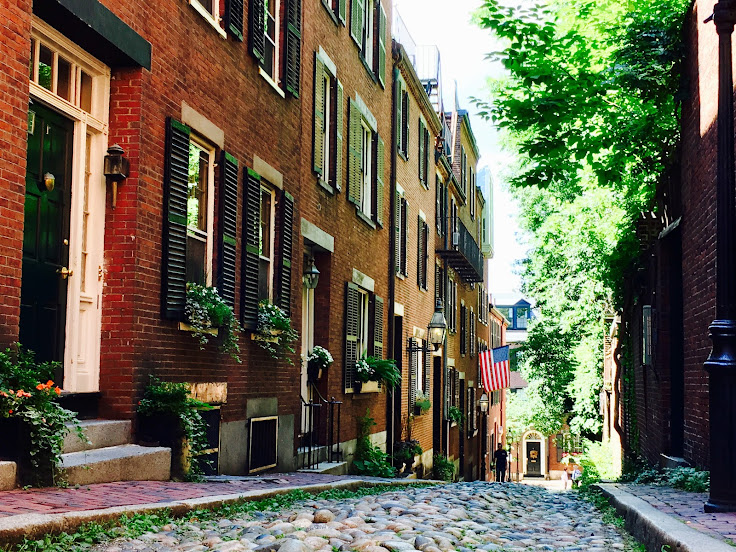 The Insta-Worthy Stroll of Back Bay & Beacon Hill, Boston

There are places that make you work for a so-so photo and there are others that let you accidentally capture masterpieces. The Back Bay and Beacon Hill neighborhoods are more of the latter. This walk of photogenic Boston is filled with my favorite spots to photograph some of the most iconic vistas of the city. We'll explore a variety of places, from a magical library hall to medieval-inspired brick houses, from artisanal French pastries to Colonial-era cobblestone streets. Come photograph Boston in a new light - Instagram will go nuts.

Shop 'Til You Drop: the Best Boutiques of Newbury St 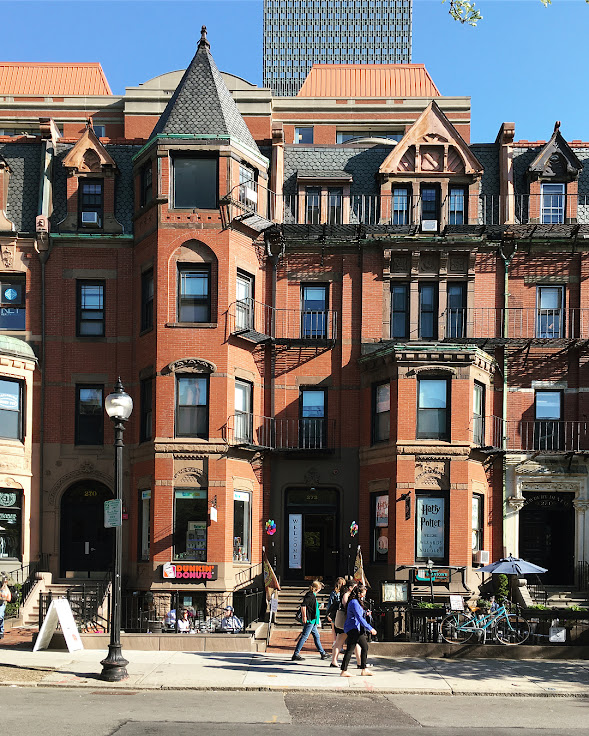 Shop 'Til You Drop: the Best Boutiques of Newbury St

1 hour and 30 minutes
Guided by Brie

As far as I’m concerned, Newbury Street is the perfect shopping destination. Stroll the boutiques along the brick row houses to find stylish clothing, amazing shoes and bespoke accessories of every type. If you want a local to bring you to the best boutiques of Newbury St, this is the walk for you. I'll take you to my favorite independent shops for sophisticated styles, street-chic fashions, rustic handmade threads, retro-hip sports gear and the best hot chocolate in the world. There's something for everyone on your shopping list.

A Walk of Harvard University: Secret Societies, Scandalous Traditions & Life on the Yard 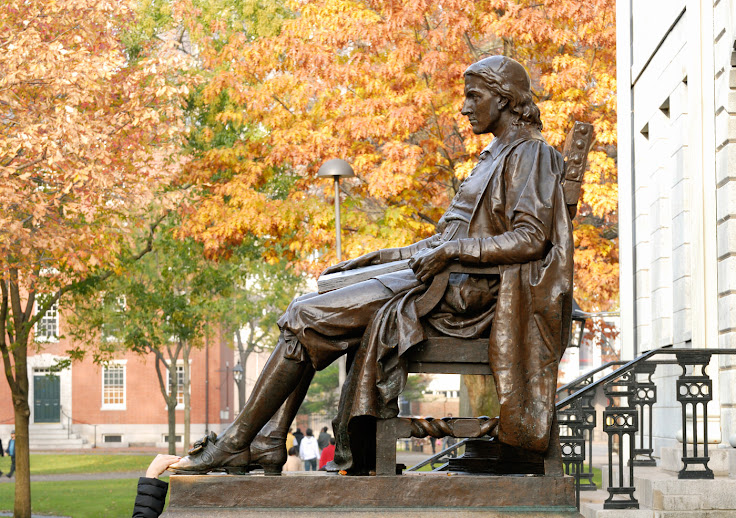 A Walk of Harvard University: Secret Societies, Scandalous Traditions & Life on the Yard

As an alum of the university, I know a few things about Harvard, student life and the bustle around Harvard Square. Come on a walk of the campus and surrounding hangout spots. Along the way we'll discuss student traditions, celebrity alums, secret societies and more. Our walk will include top gems in Harvard Yard, a visit to the Coop student store, and a cocktail at one of the favorite restaurants in Harvard Square.

Boston to Cambridge: Parks, Brownstones and a Killer Skyline 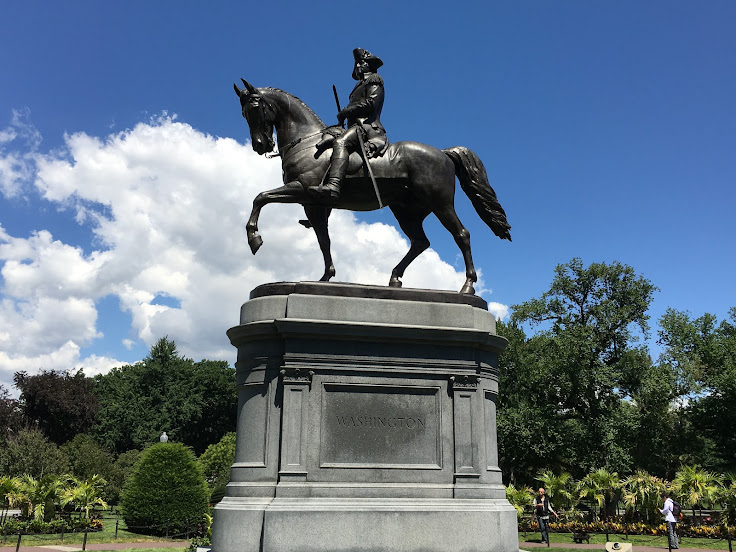 Boston to Cambridge: Parks, Brownstones and a Killer Skyline

Boston is a big city squished into a relatively small space. Many of the popular sites that are “in Boston” are actually in the immediate suburbs. On this walk, we’ll explore some of the charming spots from the city-proper and then head to its most popular neighbor: Cambridge. We’ll stroll through a park, stop for coffee (or tea) in the brownstone-heaven that is Beacon Hill, and finally cross the Charles River for a special view of the downtown Boston skyline. 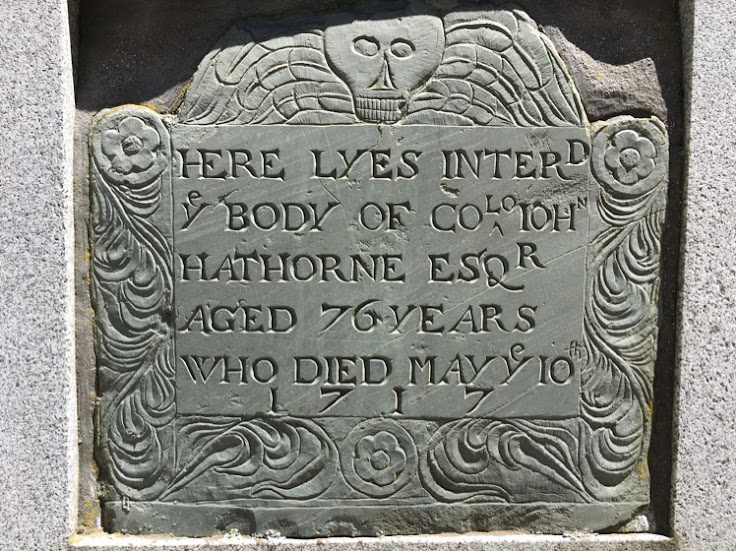 In 1692, the quiet Puritan town of Salem, Massachusetts was rocked by one of the most infamous and terrifying waves of mass hysteria in US history. Mysterious happenings in the woods around town fueled rumors of devil worshipping and hexes. Neighbors accused each other of witchcraft as the town elders sought answers. In the aftermath of the Salem Witch Trials, 20 people were killed, more than 100 imprisoned, and a town was left permanently haunted by residual spirits. Come see the sites, stories and ghosts of the Salem Witch Trials.

The Cannoli Crawl: A Showdown of the North End's Best Cannoli Bakeries 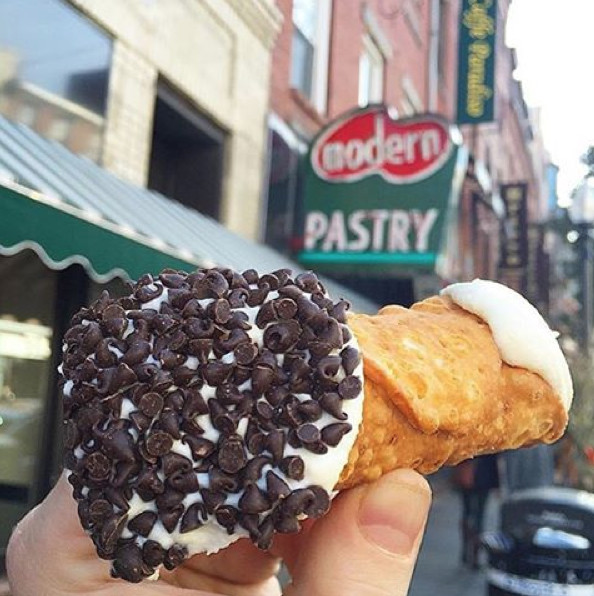 The Cannoli Crawl: A Showdown of the North End's Best Cannoli Bakeries

The North End is home to cappuccino bars, homemade pasta shops, mafioso types and some of the greatest cannoli in the country - sweetened ricotta-filled fried pastry shells. It sounds simple but much science, tradition, timing and precision are hidden inside the cream & crunch. Thankfully for us, we just get to enjoy them. Come on a crawl of five quintessential North End cannoli spots, from Maria's to Modern. Along the way, we'll discuss the origins of this Italian pastry and how to know if there is a good one in front of you. Buon appetito!

A Summer Night Done Right In The Vineyard 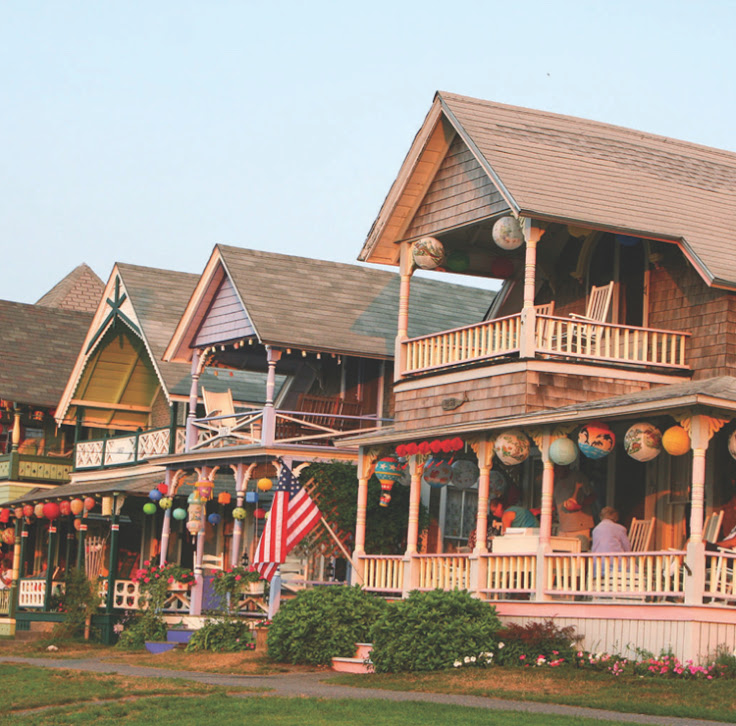 A Summer Night Done Right In The Vineyard

Just a 30 minute ferry from the cape of Massachusetts, the beautiful island of Martha’s Vineyard is a paradise that can be conquered in weeks, days, and even hours if you have the right advice. Come explore the Oak Bluffs area of the island on a perfect day for families. This walk will show you everything I love about the Vineyard and Oak Bluffs. Join me on some well-known and lesser-known spots for the best seafood, donuts and quirky culture of the island.

Inside MIT: Hidden Spaces & Student Pranks at the Massachusetts Institute of Technology 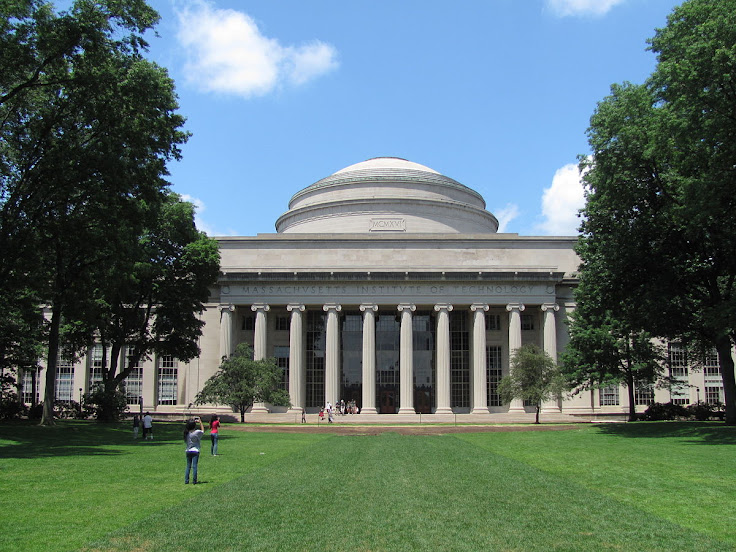 Inside MIT: Hidden Spaces & Student Pranks at the Massachusetts Institute of Technology

1 hour and 15 minutes
Guided by Steve

Whether you are a prospective student, a student, an alumnus or a mere mortal, MIT is worth exploring. The university's quantitative demeanor (all buildings are numbered, not named) is juxtaposed with flamboyant architecture, vibrant art and ambitious student pranks. Come on a walk of MIT's most famous buildings, secret enclaves and favorite hangouts. Along the way, we'll check out student life, architecture, city vistas, and sample the world's best sticky buns.